A record of work sold

This is an ongoing project to list and classify all Lowry's work that has been sold over many years from various sources.

Born in Salford in 1887, L S Lowry rarely left Manchester and Salford and indeed Great Britain, despite regularly exhibiting north of the border, in Europe and in France in particular.
Self-taught to some extent, Lowry maintained employment as a cashier at the Pall Mall Property Company in Salford and as a clerk for a firm of accountants throughout his life.
His role as a rent collector allowed him to roam Salford and Manchester exploring the urban landscape and its inhabitants.
The Hawker's Cart is typical of his paintings from the late 1920s and early 1930s when he had just finished attending Salford School of Art and had almost fully developed his unique
visual aesthetic and the sort of subject matter which was to remain of constant interest throughout his career. The year just before the Hawker's Cart was painted, 1928, was significant
because it saw the emergence of Flake White as his most important pigment.
It is most dominant in terms of the proportion of the canvas it occupies. Lowry eventually took to ageing the background colour of the canvas, applying the pigment and letting it sit for
several years so that the hue took on an off-white colour, the better to blend with the narrow palette used by the artist.

The Hawker's Cart contains all the components of a successful Lowry composition, from the whimsical foregrounded people and pets, through the jaunty tenements in the middle ground and
the vertical chimneys spewing out smoke towards the grey sky, albeit domestic and not industrial. It is often said that many of Lowry's compositions take on the quality of a stageset,
and that is particularly evident here, as the building on the right of the composition in particular has taken on a theatrical coulisses-like quality, framing our window onto this street scene.
This view was also recently propounded by the Northern-born actor Sir Ian McKellan who pointed out in a private debate on Lowry's work held in London in 2009 the popularity of theatre and
the proliferation of theatres, music halls and theatre houses in the Greater Manchester area, no less than 64 according to Sir Ian. Lowry was certainly an ardent theatre-goer and in particular
an admirer of the work of the Manchester School of dramatists such as Harold Brighouse and Stanley Houghton.

The present composition is strongly linked with a series of works, on a similar scale from the late 1920s and first half of 1930s which depict men and women sometimes going about their business,
more frequently engaged in a more dramatic scene, as depicted in The Arrest, 1927 (Castle Museum Nottingham), or The Fight 1935 (The Lowry).
These paintings and the present one happily portray the theatre of everyday life and the entertainment it provides. In this case, the viewer is focused on the relatively undramatic episode of
the Hawker's Cart arriving and enticing local residents with its produce, but the element of the community watching goings on is ever-present in the figures amongst the window curtains,
observing the street and the protagonists below, or indeed looking at the viewer who is in turn yet another observer of the scene.

Whilst Lowry did not venture north of the border until 1944 when he visited Edinburgh for an exhibition, returning to paint in Glasgow subsequently,
he frequently exhibited at the Royal Scottish Academy from 1930 to 1939.
The present painting was possibly exhibited in Rochdale in 1931 and was bought by the Royal Scottish Academy the year it was exhibited there in 1934,
the same year that he was elected a member of the Manchester Academy and the Royal Society of British Artists.
The RSA clearly recognised the contribution Lowry was to make to twentieth century painting at an early stage in his career,
more than twenty years before Lowry was elected as an Associate of the Royal Academy in London, let alone a full member which did not happen until 1962. 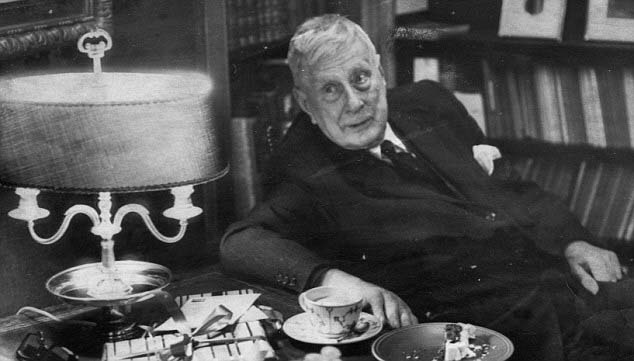 This photograph was taken in The Stone Gallery, Newcastle upon Tyne on the occasion of his 84th birthday, the Stone Gallery is now in Burford, Oxfordshire. 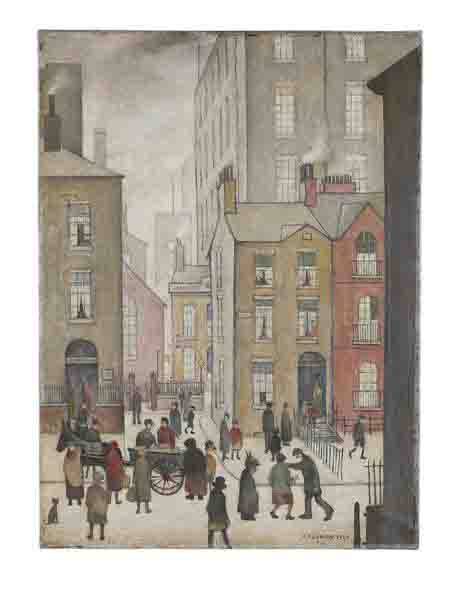