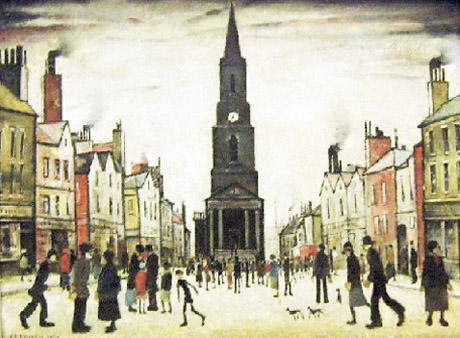 Provenance
with Lefevre Gallery, London, where purchased by Henry Morris on behalf of the present owners on 10 February 1945 (for 30 gns).
PROPERTY FROM CAMBRIDGESHIRE SCHOOLS' ART COLLECTION

The individuals represented by Lowry's famous stick men and women may have vanished forever, but the view of the town's market place remains otherwise remarkably similar.

'A Market Place, Berwick-upon-Tweed' has never been on the open market for many years. It was bought in 1945 by Henry Morris, the county council's chief education officer, from the Lefevre Gallery in London for 30 guineas.

A specialist in Lowry's works was quoted as saying,
"This is a wonderful example of a top quality work by one of the 20th century's most popular artists. "The painting is a classic street scene by L S Lowry, painted during the golden, middle years of his career, and depicts the town of Berwick-upon-Tweed, just before the Second World War." "The picture has a joyful appeal, showing a bright and bustling street with Lowry figures going about their daily business." She added: "With its unbroken primary source provenance, and excellent original condition, this is a highly desirable work of art."

Lowry loved Berwick-upon-Tweed, which lies on the border of Northumberland and Scotland, and painted this picture when he was ordered by his doctor to the coastal town to get some fresh air and take a breather from looking after his unwell mother.

Cambridgeshire County Council took the decision to sell a number of valuable works from its collection in 2006. The Lowry is the last from that batch to be sold.

Councillor David Harty, its member for learning, said: "The painting was a shrewd investment by Henry Morris on behalf of Cambridgeshire County Council more than 60 years ago, and we believe the time is now right to sell it."