There were many publishers over the years, some used The Fine Art Trade Guild to stamp and authenticate the work, others simply had Lowry sign and number the prints, sometimes with the publishers embossed stamp at the side.
A signed limited edition title is either stamped by The Fine Art Trade Guild, or numbered, or in the case of 'The Sunday Observer', they published three titles, 'Level Crossing with Train', 'Mill scene',
'Market scene in a Northern Town' as limited editions, and had Lowry sign each print, but there was no stamping or numbering to show the edition number.

It is important to state, there is only one signed limited edition published per title. No further signed editions were published, and they were either Fine Art Trade Guild stamped or numbered, and/or embossed by the publisher's stamp.
We are able to offer these signed prints for sale, either complete with the original framing, or beautifully mounted in a conservation french bound mount, or framed complete in our workshop using museum quality glass.

These prints are limited editions, personally signed by L.S. Lowry and are 40-70 years old;
Click on the images below to view a large image and details. (alphabetical order) 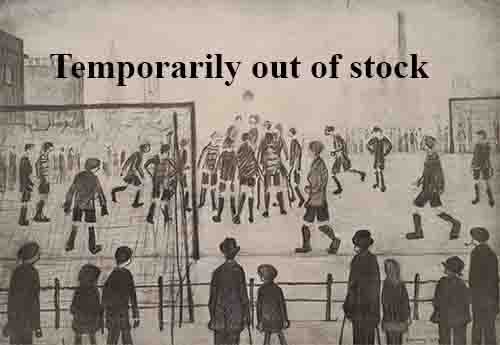 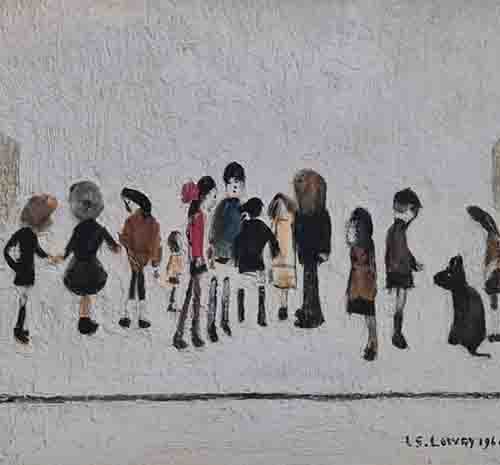 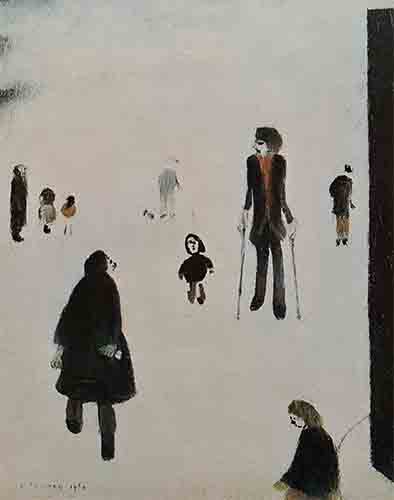 Figures in the Park

On the Sands
signed print

View of a Town

The signed, prints have an embossed stamp, by the Fine art trade guild, or that of the publisher; eg. Street scene, Mrs Swindell's picture
A few titles are simply signed and numbered,eg. Figures in the Park, Our Town
Several titles bear Lowry's personal signature and are numbered in pencil, along with the publisher's stamp; Burford church, great Ancoats street, St. Mary's Beswick
Three titles published by The Sunday Observer, eg. 'Mill scene', 'Level crossing' and 'Market scene' are simply signed in pencil by Lowry,
but not stamped or numbered, although they are limited edition prints (editions of 750).

A brief biography and history of L.S. Lowry
L.S.Lowry viewed the world around him in a serious yet sensitive way.
His querky personality saw the ordinary things that most people take for granted or indeed miss altogether,
and he brought this insight into his paintings in a way that many people could understand and reflect on.
His incentive was not for power, glory or financial gain, he simply saw and portrayed in his paintings, people of all ages and all sizes moving and acting in ways that he found utterly fascinating.
Sometimes, and indeed often the scenes painted were quite sad and oppressive, such as 'The Fever Van' or 'Industrial Town'or 'Industrial scene,
sometimes almost comical, eg. The Cart, Man lying on a Wall, Woman with Beard, the noticeboard, the contraption.

Laurence stephen Lowry was born in 1887, and was brought up in the reasonably respectable area of Victoria Park, Manchester.
His father died in 1932 leaving debts and he was forced to leave Victoria park for the poorer industrial town of Pendlebury.
His mother became bedridden and Lowry spent many years looking after her, painting only in the evenings once she was asleep.

Lowry's mother died some seven years later and Lowry painted 'The Bedroom in Pendlebury' where he had spent so much time caring for his mother.
It was in the 1930s that Lowry eventually came to develop his own unique style that we are so familiar with today.
Had it not been for the move to Pendlebury, he would not have witnessed first hand, the industrial mills in action day and night.
The long hours, hard work and squalid living conditions that the people all around him suffered in order to survive.
Lowry's interest turned more from the industrial buildings and machines to the individuals that he would see everyday, all around him.

Fascinated, yet shocked, and in awe, by the resilience that could be seen of the men, women and children that had become a part of this life.
Lowry's paintings portrayed everyday life, from 'Peel Park' to a disturbance in the 'Industrial scene' and 'The Fever Van'.

Lowry loved to go to the coast, and in particular the north-east. He would often stay at the Seaburn Hotel in Sunderland, and enjoy sketching the ships passing through the harbour.
One of his finest paintings to be published is 'Berwick-on-Tweed'. He would travel along the north-east coast, and occasionally visit the south of England .. Burford in Oxfordshire, and Deal on the south coast.

Laurence stephen lowry painted several thousand paintings during his carrer as an artist, from farm buildings in the countryside to industrial scenes of Britain at play in the northerrn towns of Lancashire.
He did travel a little throughout Britain, his paintings, and subsequently signed limited editions of Sailing boats, The level crossing, Burton-on-Trent' and Burford church illustrate this.
Although he was most 'at home' in and around the Manchester and Salford areas, 'Station approach', People standing about, The Three cats Alstow and St. Simon's church are all paintings and drawings of this region.
Lowry enjoyed watching football, and his most famous and sought after signed limited edition is 'Going to the match';
the only other published picture of football is a drawing titled 'The Football Match', this was published as a signed and numbered limited edition in 1973.

We hope that you will browse and enjoy Paintings and signed, prints by wildlife artist David Shepherd,
The fine watercolour work of William RussellFlint whose paintings and signed, prints are highly revered.
For more than sixty years Sir William Russell Flint painted the finest waterolours depicting the countryside of France,
often adorned with his favourite model Cecilia Green in various 'cheeky' poses.
Well known for his portraits of Cecilia, Russell Flint's greatest works illustrate the architecture and landscape
throughout Britanny, Dordogne, and the south east of rural France
This house is ideally situated to enjoy the Dordogne
The work of Mr L.S.Lowry has become of great artistic and financial importance in recent years.
If you are considering an investment in fine art, I thoroughly recommend you take a look at Lowry limited edition prints.
Our aim is to offer our clients an excellent service at unbeatable prices.
Back to the Lowry home page