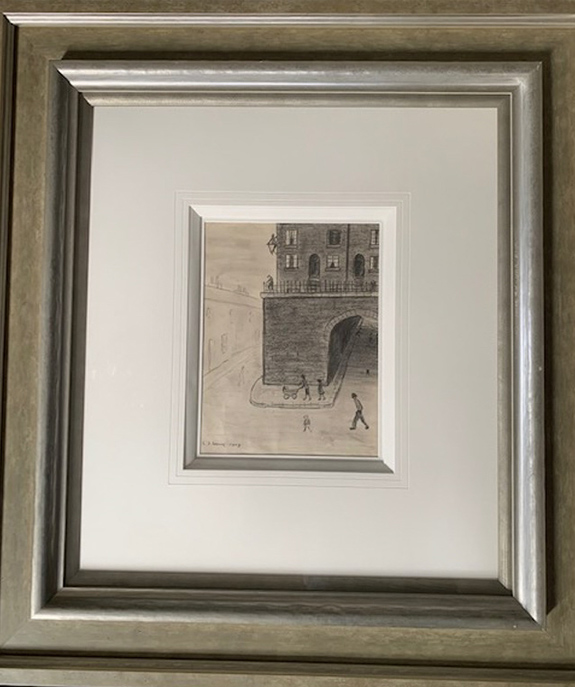 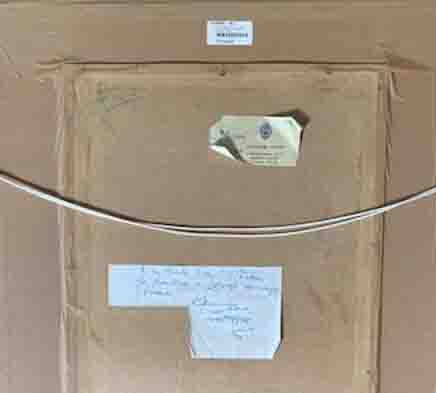 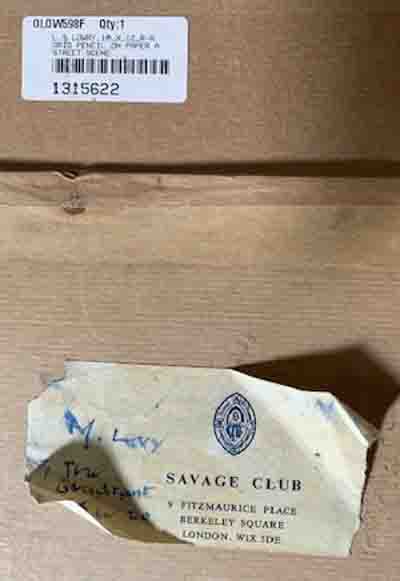 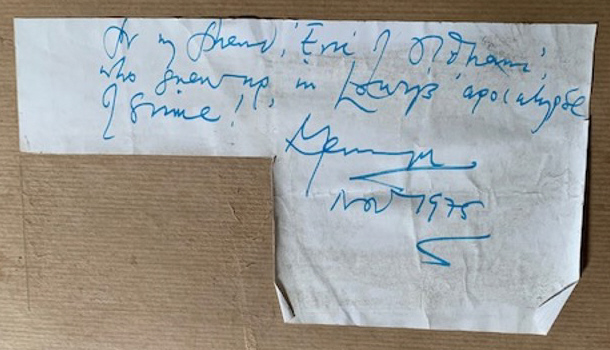 By 1957, Lowry had become more interested in people and individuals he saw everyday.
He felt a progression in his work from portraying the industrial scenes with crowds to drawing specific figures.
'Man lying on a wall' and 'Woman with Beard' are typical examples painted around the same time.
Lowry wished to portray the uniqeness of individuals.
He commented to the art critc Edward Mullins in the 1960s "Everyone's different, Look"...
That man's got a twitch... he's got a limp...
he's had too much beer... those two have just had a row.. That woman, she's angry with her child..
It's wonderful, isn't it..? The battle of life, sir, that's what it is, The battle of life."

This drawing was executed after Lowry had ceased work at the Pall Mall Property Company in 1952.
In 1955 he was made an associate member of the Royal Academy.
By 1957 Lowry's work had become highly recogized, collectors included The Queen Mother, and the Prime Minister's daughter.
In the same year as this drawing was produced, the BBC produced a documentary on Lowry, at home, at work and around Salford.

This drawing was owned by the artist and writer Mervyn Levy (1914 - 1996) former flat mate of the poet Dylan Thomas, and an authority
on Lowry's work, as well as a close friend of the artist.
Levy commentated and wrote widely on Lowry's art including the definitive publications, The Paintings of L.S. Lowry (1975)
and The Drawingsof Lowry (1976).
The looming brick building and gaping arch which form the structure of this drawing, bring to mind Levy's observation that in Lowry's work,
buildings may suddenly assume all the character and personality of a human being.

A brief biography and history of L.S. Lowry.
L.S.Lowry viewed the world around him in a serious yet sensitive way.
His querky personality saw the ordinary things that most people take for granted or indeed miss altogether,
and he brought this insight into his paintings in a way that many people
could understand and reflect on. His incentive was not for power, glory or financial gain, he simply saw and portrayed in his paintings,
people of all ages and all sizes moving and acting in ways that he found utterly fascinating.
Sometimes, and indeed often the scenes painted were quite sad and oppressive, such as 'The Fever Van' or 'Industrial Town'or 'Industrial scene,
sometimes almost comical, eg. The Cart, Man lying on a Wall, Woman with Beard, the noticeboard, the contraption.

Laurence stephen Lowry was born in 1887, and was brought up in the reasonably respectable area of Victoria Park, Manchester.
His father died in 1932 leaving debts and he was forced to leave Victoria park for the poorer industrial town of Pendlebury.
His mother became bedridden and Lowry spent many years looking after her, painting only in the evenings once she was asleep.

Lowry's mother died some seven years later and Lowry painted 'The Bedroom in Pendlebury' where he had spent so much time caring for his mother.
It was in the 1930s that Lowry eventually came to develop his own unique style that we are so familiar with today.
Had it not been for the move to Pendlebury, he would not have witnessed first hand, the industrial mills in action day and night.
The long hours, hard work and squalid living conditions that the people all around him suffered in order to survive.
Lowry's interest turned more from the industrial buildings and machines to the individuals that he would see everyday, all around him.

Fascinated, yet shocked, and in awe, by the resilience that could be seen of the men, women and children that had become a part of this life.
Lowry's paintings portrayed everyday life, from 'Peel Park' to a disturbance in the 'Industrial scene' and 'The Fever Van'.

Lowry loved to go to the coast, and in particular the north-east. He would often stay at the Seaburn Hotel in Sunderland, and enjoy sketching the ships passing through the harbour.
One of his finest paintings to be published is 'Berwick-on-Tweed'. He would travel along the north-east coast, and occasionally visit the south of England .. Burford in Oxfordshire, and Deal on the south coast.

wildlife artist David Shepherd,
William Russell Flint whose paintings and signed, prints are highly revered.
Mr L.S.Lowry.
Our aim is to offer our clients an excellent service at unbeatable prices.
Back to the Lowry home page