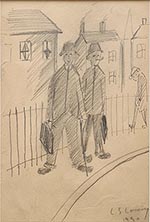 A brief biography and history of L.S. Lowry.
L.S.Lowry viewed the world around him in a serious yet sensitive way.
His querky personality saw the ordinary things that most people take for granted or indeed miss altogether,
and he brought this insight into his paintings in a way that many people
could understand and reflect on. His incentive was not for power, glory or financial gain, he simply saw and portrayed in his paintings,
people of all ages and all sizes moving and acting in ways that he found utterly fascinating.
Sometimes, and indeed often the scenes painted were quite sad and oppressive, such as 'The Fever Van' or 'Industrial Town'or 'Industrial scene,
sometimes almost comical, eg. The Cart, Man lying on a Wall, Woman with Beard, the noticeboard, the contraption.

We hope that you will browse and enjoy Paintings and signed, prints by wildlife artist David Shepherd,
The fine watercolour work of William RussellFlint whose paintings and signed, prints are highly revered.
For more than sixty years Sir William Russell Flint painted the finest waterolours depicting the countryside of France,
often adorned with his favourite model Cecilia Green in various 'cheeky' poses.
Well known for his portraits of Cecilia, Russell Flint's greatest works illustrate the architecture and landscape
throughout Britanny, Dordogne, and the south east of rural France
This house is ideally situated to enjoy the Dordogne
The work of Mr L.S.Lowry has become of great artistic and financial importance in recent years.
If you are considering an investment in fine art, I thoroughly recommend you take a look at Lowry limited edition prints.
Our aim is to offer our clients an excellent service at unbeatable prices.
Back to the Lowry home page