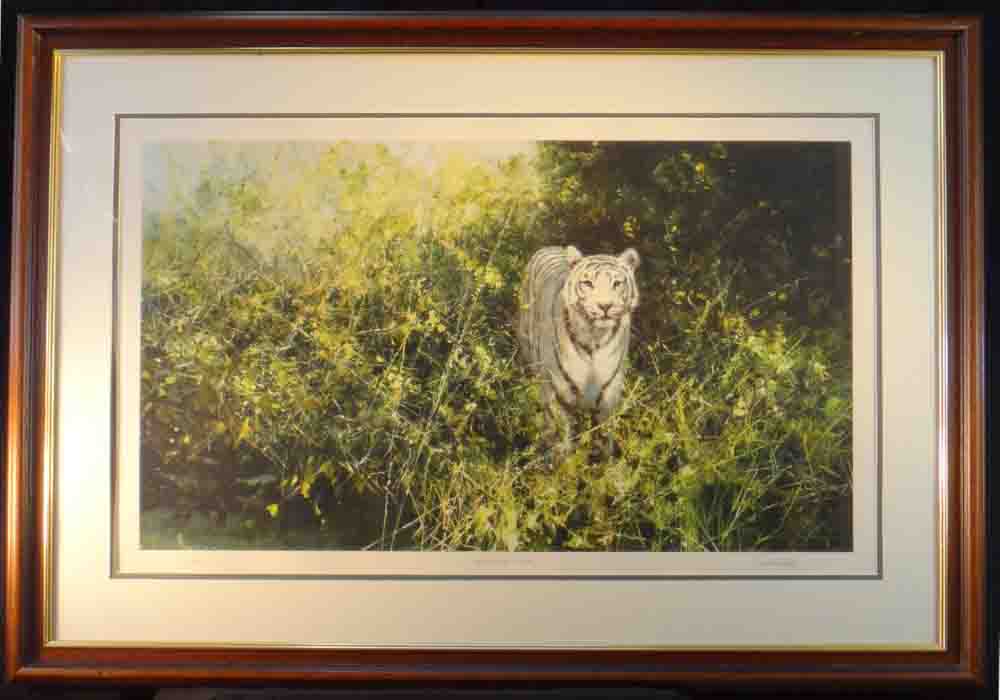 The white Bengal tigers are distinctive due to the color of their fur.
The white fur caused by a lack of the pigment pheomelanin, which is found in Bengal tigers with orange color fur.
When compared to Bengal tigers, the white Bengal tigers tend to grow faster and heavier than the orange Bengal tiger.
They also tend to be somewhat bigger at birth, and as fully grown adults. White Bengal tigers are fully grown when they are 2 to 3 years of age.
White male tigers reach weights of 200 to 230 kilograms (440 to 510 lb) and can grow up to 3 meters (9.8 ft) in length.
As with all tigers, the white Bengal tiger's stripes are like fingerprints, with no two tigers having the same pattern.
The stripes of the tiger are a pigmentation of the skin; if an individual were to be shaved, its distinctive coat pattern would still be visible.
For a white Bengal tiger to be born, both parents must carry the unusual gene for white colouring, which only happens naturally about once in 10,000 births.
Dark-striped white individuals are well-documented in the Bengal tiger subspecies (Panthera tigris) as well as having been reported historically in several other subspecies.
Currently, several hundred white tigers are in captivity worldwide, with about one hundred being found in India.
Their unique white color fur has made them popular in entertainment showcasing exotic animals, and at zoos.

Sir William Russell Flint.
and Perigueux is a House to let in France offering complete tranquility and relaxation.
wildlife of Africa, India and Britain, prints and paintings by David Shepherd The work of L.S. Lowry has become some of the most sought after in British history; his paintings and signed prints are achieving record prices in the artworld,
made even more collectable due to the rarity of the work and the relatively few signed limited edition prints that have been published.