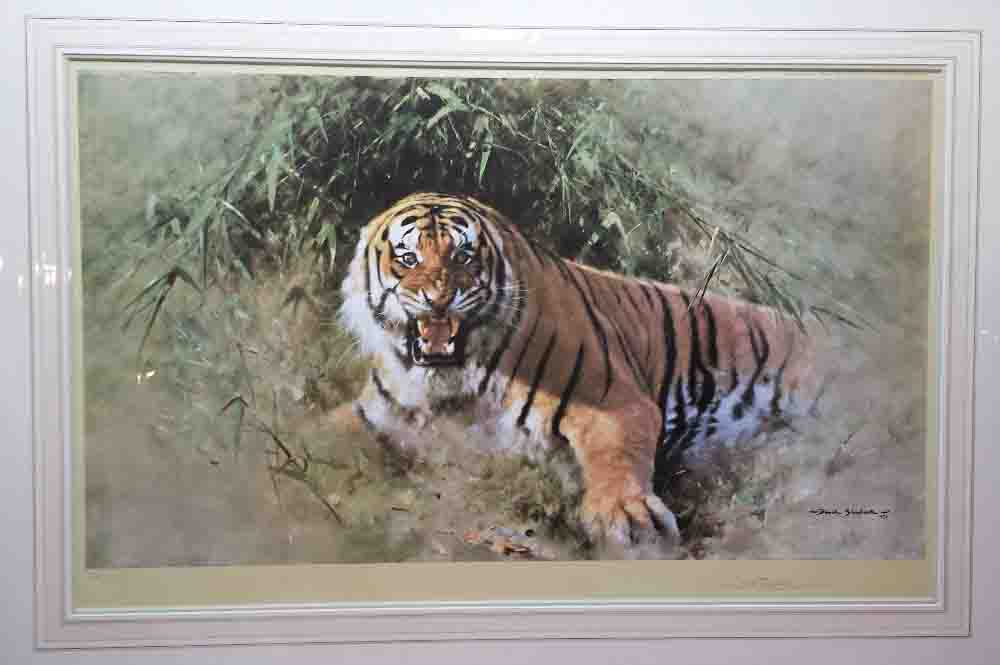 Tiger Fire
Signed Limited Edition
Published 1973
Image Size 39" X 22"
Complete with wash/line french bound mount.
This painting was published in aid of the World Wildlife Fund's Operation Tiger,
Along with the original painting many thousands of pounds were raised for this cause

One of the most famous of David's paintings... "Tiger Fire"

Biography of wildlife artist, David Shepherd, CBE, FRSA, FRGS, OBE.
Internationally recognized as the world's best wildlife artist. David Shepherd has at all times felt that he had a duty in the form of conservation towards the world and the animals that inhabit our planet. In his lifetime, David Shepherd has painted and drawn many pictures, and is able to share his many tales and experiences with people internationally, often talking at charity dinners and prestigeous social events. His persona lends itself naturally to this cause, as he is a most approachable down-to-earth fellow who enjoys sharing his pleasure of art and his concern over the diminishing wildlife throughout the world. In his early days, he was 'thrown' into the creative world purely by chance, as he wasn't particularly keen about other college activities.

Sir William Russell Flint's work needs little introduction in the world of art, here
we stock hundreds of this artist's signed limited edition prints and always a fine selection of his original watercolour paintings.
Many paintings have been produced by Sir William Russell Flint in south west France, near the beautiful towns of Brantome
and Perigueux. A holiday house available to rent in Dordogne France; read more, offering complete tranquility and relaxation.
L.S. Lowry prints view Back to David Shepherd signed prints for sale