"Conservation of endangered species is paramount for the survival of the planet." David Shepherd
Wildlife artist David Shepherd has mentioned he feels "very proud and honoured" to have been awarded a CBE for his work to charity and wildlife conservation.
The wildlife artist, seventy seven years old, collected the award from the Prince of Wales at a Buckingham Palace ceremony.
Since he started his conservation foundation in 1960, he and supporters of the David Shepherd Wildlife Trust
have earnt over three million pounds for the benefit of wildlife protection.
David started his career by offering some of his paintings of birds to local tourists whilst in Kenya. 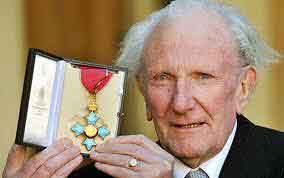 David Shepherd receiving his CBE from the Princess of Wales.

David Shepherd explained that his charity had just lately helped black rhino live and breed again
in a South African national park after a one hundred twenty a hundred and twenty year absence.

Turning his efforts now to other species on the brink of extinction throughout the world.
He stated that many wild animals risk becoming extinct, unless the ruling powers in the Far East worked harder to protect them.
"There will not be a future for us except if we act very quickly to cease the destruction of all the various species around us that share this earth," he explained.
"We seem to assume that whatever we do to the world, it will be fine, but it is becoming dramatically obvious that this is not the case".


Biography of wildlife artist, David Shepherd, CBE, FRSA, FRGS, OBE.
Internationally recognized as the world's best wildlife artist. David Shepherd has at all times felt that he had a duty in the form of conservation towards the world and the animals that inhabit our planet. In his lifetime, David Shepherd has painted and drawn many pictures, and is able to share his many tales and experiences with people internationally, often talking at charity dinners and prestigeous social events. His persona lends itself naturally to this cause, as he is a most approachable down-to-earth fellow who enjoys sharing his pleasure of art and his concern over the diminishing wildlife throughout the world. In his early days, he was 'thrown' into the creative world purely by chance, as he wasn't particularly keen about other college activities.

We specialise in David Shepherd paintings and limited edition prints.

We specialize in signed prints and original paintings and drawings by the world acclaimed artist L.S.Lowry.
The demand for his work has now reached record highs, and due to the relatively few signed limited edition prints available,
they are proving to be an excellent investment, much greater than any current banking investments.
A watercolourist, whose work needs little introduction in the world of art is Sir William Russell Flint.
We stock hundreds of this artist's signed limited edition prints and always a fine selection of his original watercolour paintings.
Throughout his life Sir William Russell Flint has spent many years painting beautiful watercolour images of scenes in France,
in particular Dordogne and the Perigord, where this beautiful holiday house is to let click here
and offers complete tranquility and relaxation.
There are also a number of signed limited edition prints of paintings from Britanny, The Loire, Ardeche, Provence.
We have for sale several original paintings from the south west France, near to the beautiful towns of Brantome and Perigueux and also Languedoc
His work has now become regarded as some of the finest watercolour paintings in the world.
Back to David Shepherd prints for sale