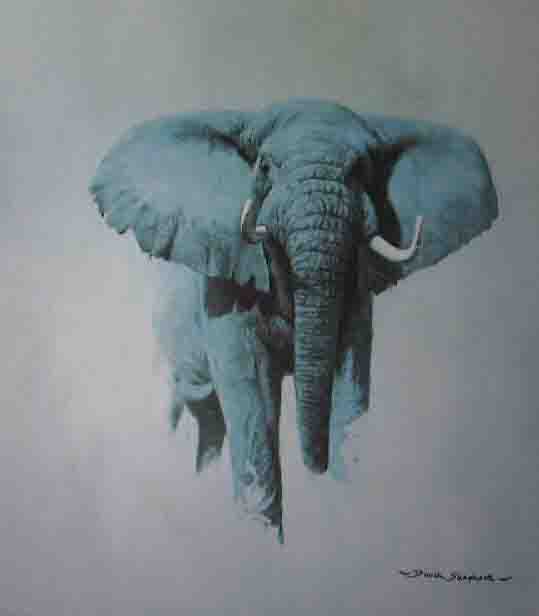 Tusks and molars
Both male and female African elephants have tusks that grow from deciduous teeth called tushes, which are replaced by tusks when calves are about one year old.
Tusks are composed of dentin, which forms small diamond-shaped structures in the tusk's center that become larger at its periphery.
Tusks are primarily used to dig for roots and strip the bark from trees for food, for fighting each other during mating season, and for defending themselves against predators.
The tusks weigh from 23 to 45 kg (51–99 lb) and can be from 1.5 to 2.4 m (5–8 ft) long.
They are curved forward and continue to grow throughout the elephant's lifetime.
The dental formula of elephants is
1.0.3.3
0.0.3.3
× 2 = 26.
Elephants have four molars; each weighs about 5 kg (11 lb) and measures about 30 cm (12 in) long.
As the front pair wears down and drops out in pieces, the back pair moves forward, and two new molars emerge in the back of the mouth.
Elephants replace their teeth four to six times in their lifetimes.
At around 40 to 60 years of age, the elephant loses the last of its molars and will likely die of starvation which is a common cause of death.
African elephants have 24 teeth in total, six on each quadrant of the jaw. The enamel plates of the molars are fewer in number than in Asian elephants.